As a result of close collaborative work between the University of Nantes (JRC CNRS/6554 LETG) and the Conservatoire du littoral, the mapping of French Overseas mangroves was the subject of a PhD thesis started in fall 2013. The aim of this piece of work is to develop a reproducible and harmonized mapping methodology for Overseas mangroves, with a view to monitoring the development of these ecosystems. The work is based on data acquired in-field (four pilot sites in Guadeloupe, French Guiana, Mayotte and New Caledonia), and on the processing of high-resolution satellite images (Pleiades constellation) using innovative and scarcely used teledetection techniques (object-oriented approach).

This initial mapping will be based on a harmonized mangrove typology for Overseas entities, and will help establish basic statistics of the surface areas and the health of all French mangroves (vegetation index, development stage, estimated aerial biomass). This has never yet been accomplished.

The first results are expected for late 2014, along with the publication of a harmonized typology, to be used in the mapping of French overseas mangroves. In 2015, a mapping methodology guide for these environments will also be published, and in 2016 the first ever harmonized map of Overseas mangroves will be released.

The in-field missions were conducted between February and August 2014, in four pilot sites: the Grand Cul-de-sac Marin in Guadeloupe, the mangrove on the estuary of Sinnamary River in French Guiana, the mangrove in Bouéni Bay in Mayotte and the Cœur de Voh mangrove in New Caledonia. These sites were chosen to best represent the diversity of French mangroves.

Wearing boots and mosquito repellents, we worked towards implementing the protocol established by Florent Taureau, the PhD student in charge of the study. Before arriving on-site, about twenty GPS spots (that we called “plots”) were identified in the study area by analyzing satellite images and existing knowledge of the surroundings. In spectacular landscapes, and sometimes accompanied by flocks of red ibis or snowy egrets, we went to all these plots – either by boat or by foot. Our adventures were sometimes epic: at one stage we had to cross mud flats at low tide, we were sinking down to our waists; we also had to cross areas with extremely dense vegetation, meaning we had to contort ourselves through the mangroves’ high roots to pass. Once we had reached our destination, we would take the temperature, measure pH and salt levels of the water contained in the soil. We would identify, count and measure the trees located in a 270 to 4,300 square foot area, and would note down the optical features (spectral signature) of the surrounding vegetation. This data was then cross-referenced with satellite images, thus enabling us to draw up a precise mangrove map.

During our missions, we were greatly aided by local teams of scientists and a number of helpers. This is the perfect occasion to thank them for their expert advice and good spirits out in the field! 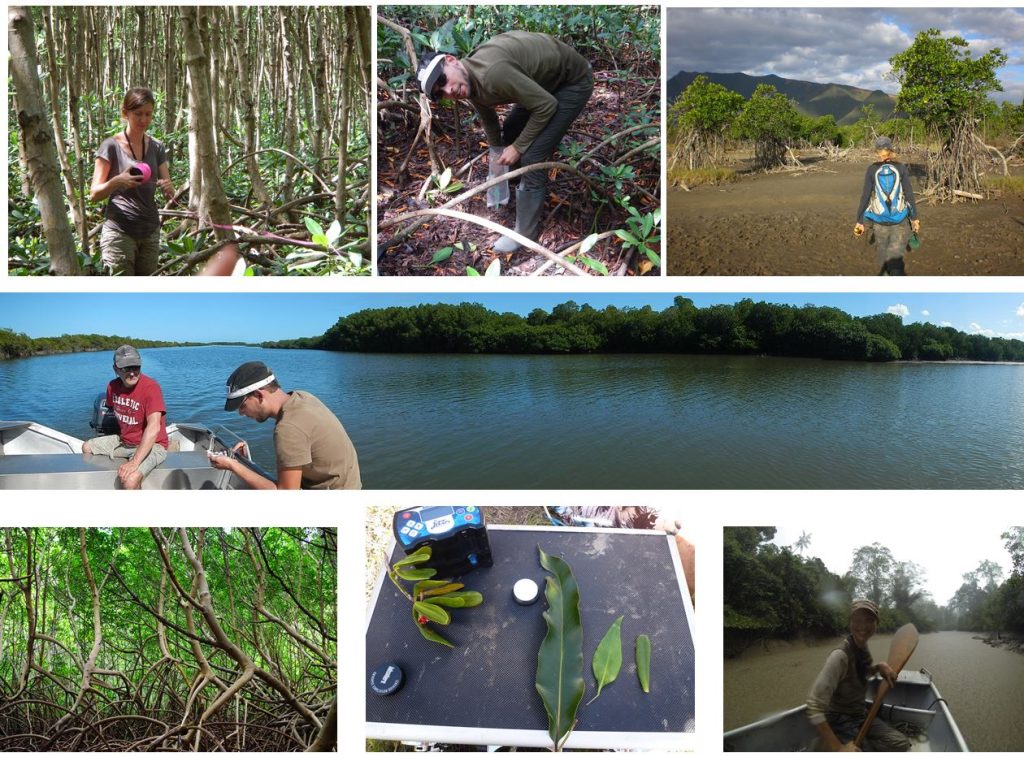