On Friday November 7, 2014, during the night, heavy rain started to beat down on the island of Saint Martin, causing the Small and Large Ponds to overflow and thus flood all the roads and houses in the Terres Basses area. Close to 28 inches of water fell in the space of a few hours.

The owners, first to face the emergency, pumped the zone dry and evacuated the excess water to the nearby sea. 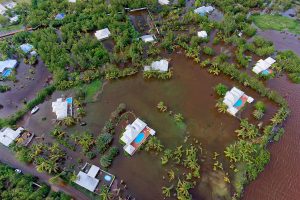 This type of phenomenon is exceptional in Saint Martin. It had actually never happened before from inhabitants’ memory. How could rainfall that did not even last one full day cause so much damage, in a place where floods had never even occurred before? Even hurricane Gonzalo did not have such harsh consequences.

In light of this never-before-seen situation, the Terres Basses owners’ association turned to the authorities to find a solution should such a disaster happen again. The Conservatoire du littoral, who owns the ponds, offered to compile a technical report and background history of the ponds, to try and understand why these floods occurred.

The urbanization of the Terres Basses area and the lack of drainage towards the sea were clearly the main causes that led to this rise in water levels: the urban constructions were blocking the natural water evacuation process from the ponds to the sea.

One of the solutions considered to face this kind of situation in the future was to build an artificial, underground drainage system, locked by a sluice gate.

As a result of the flooding, the following damage was reported:

The water rose up onto the main road just next to the Small pond in the Baie Rouge (Red Bay) area, and onto all the other roads within the Terres Basses area. Houses were also affected: in total, about forty homes were damaged. 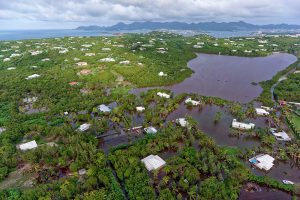 Inhabitants were deprived of running water and electricity, as the terminals were all flooded.

The excess water caused the wastewater pipes to overflow and run into the pond.

Since late 2011, the Nature Reserve has conducted monthly inventories of shorebirds in certain of Saint Martin’s ponds, including the Large pond. The effects of the incident, combined with those of hurricane Gonzalo just a few weeks before, could clearly be observed, both in terms of the diversity of species and the number of animals remaining.

Only four species were observed in October, then three in November, whereas over ten species were living in the Large pond the previous years at the same period. Missing species include the white-cheeked pintail and small “sandpiper” shorebirds which used to live there during this season. The remaining species were significantly less abundant compared with previous years. For instance, 14 black-necked stilts were accounted for in 2014, whereas there were over thirty of them in 2013. All species combined, only 24 animals were observed at the Large pond site, compared with 74 in 2013 and 131 in 2012.

Nonetheless, the most recent headcount shows a gradual return to normal figures, both in terms of species present and their abundance.