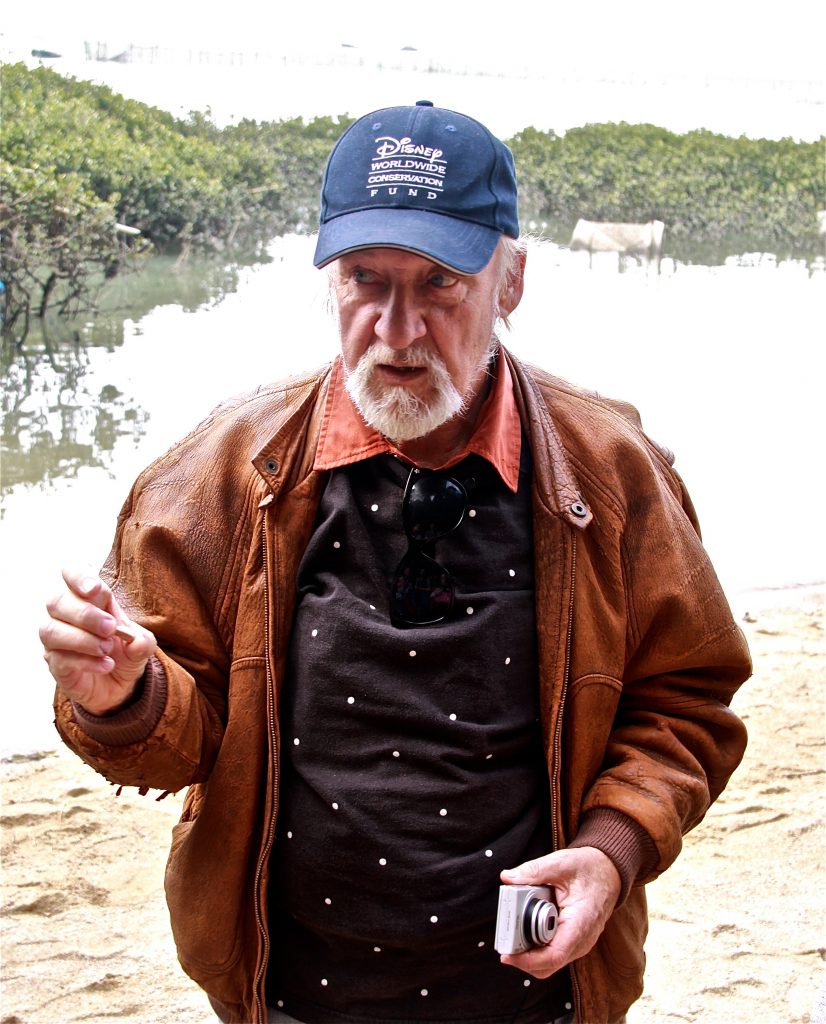 To begin, can you introduce yourself in a few words? (where do you come from? Your career path…) Etc.

I was born and raised in England where I earned a BA in English/Drama and trained as a journalist. When I left the UK I began my travels, spending three years in Africa before moving to Canada and the USA (alternately). For the past 20 years I’ve lived on Cayman Brac, one of the smaller Caribbean Cayman Islands. I received my Teaching Certification and Masters in Primary Education in 2004 from Atlantic Union College, Massachusetts. Since 1989 I have been involved in the development and implementation of an in-depth, science-based, hands-on wetlands curriculum – initially for temperate wetland ecology, and for the past 20 years with mangroves as Global Education Director for the Mangrove Action Project (MAP).

Tell us more about the association MAP (Mangrove Action Project), an NGO dedicated to the fight against mangrove forests degradation and deforestation around the world. How many people are part of the team? What are the main objectives?

The Mangrove Action Project (MAP) has been on the vanguard of mangrove conservation since its founding in 1992. Along the way, we’ve learned much about these amazing coastal wetlands that thrive in the intertidal zones of the tropical and sub-tropical regions.

Mangroves are the rainforests by the sea, nurturing a cornucopia of life, immensely important for protecting coral reefs and sea grass beds, and buffering against storm surges and tsunamis, while playing a vital role in combating climate change. Large stretches of the subtropical and tropical coastline are dominated by mangroves, once estimated to cover an area of over 36 million hectares. Now, less than 15 million ha remain—less than half the original area.

MAP works to conserve and restore our planets’s mangroves via a five-tiered approach: Education via our Marvellous Mangrove Curriculum, Conservation/Restoration via our Community-based Ecological Mangrove Restoration (CBEMR), networking and outreach via our global network, information sharing via our biweekly newsletter and social media, and sustainable alternative development initiatives involving local communities. MAP now has over 500 non-governmental organizations and 350 mangrove ecologists involved in our global network from over 60 nations.

We are a small proactive group of eight – half full-time, half volunteer specialists –working with mangrove communities throughout the world. It is our belief that it is the local communities who are front-line involved in mangrove conservation on all levels, and so we work directly with those communities and the local organisations that represent their interests.

Our field managers would, I think, be very interested to know more about the Community-Based Ecological Mangrove Restoration (CBEMR) method (“Restauration Communautaire et Écologique de la Mangrove” in French). Can you tell us what it is?

CBEMR-Community-Based Ecological Mangrove Restoration – is a mangrove restoration methodology grounded in the basic principle that restoring mangroves requires the natural ecological processes which once supported the healthy mangroves needs to be restored first and foremost. CBEMR thus places a strong emphasis on correcting hydrological problems and dealing with natural or man-made stressors in order to facilitate natural mangrove regeneration. It reaches far beyond mere hand-planting of seedlings, as is typical of mangrove restoration projects, and increases the effectiveness of restoration of degraded mangrove forests by embracing and understanding the mangrove ecosystem as a whole.

CBEMR is also a participatory, community-led process that thinks long term. Community involvement occurs from the planning stage, through implementation often engaged in the required physical adjustments to the site to the monitoring and follow-up, which may involve developing a management plan. By engaging the local community from the onset of the restoration project, CBEMR does not consider community involvement as a mere mechanism to levy manpower for field work. Rather it relies on participation as an empowering process that creates a sense of ownership of the restoration project among the community and that helps maintain the project’s benefits on the long run. The CBEMR approach teaches local people how to restore the hydrology of former or degraded mangrove sites to facilitate the natural regeneration of mangroves.

The “how to” CBEMR manual PDF is available here.

What is it exactly the curriculum ?

Marvellous Mangroves – the Teachers’ Resource Guide – is the core of our EE programs.

Following standard environmental education curriculum principles, the Mangrove Resource Guide provides teachers with +/- 350 pages of information and hands-on activities, covering everything from migrating birds and the properties of water, to what to do and find on a mangrove field trip – including data collection and species observation. It concludes with what students can do to help protect, preserve and restore mangrove habitat in their own communities.

Marvellous Mangroves is a curriculum-based, hands-on science-based program which – since it started in 2001 – has been introduced to 14 countries worldwide. Based on an award winning wetlands education program developed for use in Western Canada and the Pacific Northwest in 1990, the program emphasizes in-depth mangrove ecosystem exploration by teachers and their students.

The curriculum has to be translated and adapted for use in each country where it is introduced to interface with national and regional curriculum, plus incorporate local flora, fauna, geology and geography. It is introduced to local teachers through extended in-depth workshops, and in turn to their students in the classroom and field through Mangrove Clubs in each school. MM ties in directly with the cultural use of mangroves in each community, and one of the results of this is my recently published Merveilleuses mangrove Mythes et Legendes book with stories gathered from mangrove peoples around the world.

It is not enough to teach the true value of mangrove ecosystems through superficial means of communication. Posters, fliers, displays, websites and one-day stand-alone field trips are not enough if we are going to change the focus and understanding of teachers, students and their communities. Mere didactic pedagogy doesn’t work either. In-depth programs like Marvellous Mangroves need to teach core values through traditional education systems to develop a community mangrove ethos.

The guide is based on the latest scientific information and is beautifully illustrated with artist’s renderings of the flora and fauna of mangrove ecosystems. MAP’s goal is to adapt and introduce the curriculum, in partnerships with local NGOs and Education & Environmental Ministries, throughout tropical and sub-tropical coastal regions. To date, Marvellous Mangroves has been requested by teachers’ groups and NGOs in more than 20 nations – in addition to the 14 where it is already being used.

The translation and adaptation process, however, is long and often arduous, as it is necessary to ensure that material in the guide relates specifically to the region where it will be used. For example, the Belize version could not simply be translated into a local language for use in China, as the curriculum covers not only mangrove ecosystems, it includes topics such as migrating birds, shellfish and other related species, and human impacts. And so each adaptation much be geared to a specific region. Furthermore, cultural diversity must be taken into account so that activities and programs within the curriculum are both culturally and scientifically sound, while at the same time considering the local realities in which the teachers find themselves and the availability, or lack of, teaching resources.

One recent example of the process is having introduced Marvellous Mangroves to Suriname in Dutch, it is simply a matter of translation to French with only adaptations for local geology and geography as the flora and fauna of the two countries are essentially the same.

What are the projects of the association for the coming months / years ?

Most immediately MAP is working with WI East Africa to give an in-depth, two week CBEMR workshop in Kenya this coming November. Future workshops and EMR projects are planned for 2019 including several in Asia.

In Suriname we are co-sponsoring with WWF the Regional Training Course on Mangrove Ecosystems in the Guianas from 12 to 16 November in Coronie, Suriname. With Marvellous Mangroves we will be working for the coming year to adapt and translate the program for use in French Guyana and the Antilles. Several other countries including India and Senegal have expressed serious interest in translating and adapting the curriculum for use in their countries.